I just received a very nice review of Spilled Coffee on author Carol Newman Cronin’s blog, Where Books Meet Boats. While this story has no sailing in it, there is a rowboat, but that has nothing to do with the review. This is what she says, in part:

"The opening scene (in a coffee shop, of course) drew me in quickly, just as I expected. Ben Hughes meets a potential love interest, drops hints about his recently ended engagement, and lets us know he’s on a curious mission involving a lakeside summer cottage, some dark personal history, and a dysfunctional family.... I couldn’t wait to find out what happened next…."


"…Once I had enough information to draw my own conclusions about the ending, I enjoyed the steady drip, drip, drip of details that were carefully woven into the narrative. With each new step back into the past (artfully marked with a pocket watch picon), the story unfolded. And then in spite of my preconceived notions, the ending completely surprised me—another reason I love Chicoine’s books."

I just love how you tied in the coffee theme throughout your review. Thank you so much Carol!
Posted by J.B. Chicoine at 7:47 AM 8 comments:

A New Title and a New Concept 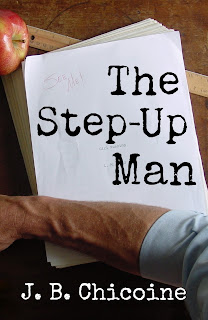 So, I've been working on my next two novels—actually, they are two novels that I have had on my hard drive for the past five years. Girl Running and its sequel Protégé have undergone so many changes in the course of revising and editing. Girl Running's first draft came in at over 150k words and is now a trim 111k. It had dropped as low as 92k, but then I had an idea. Yes, ideas can be very dangerous, but this time it feels oh, so right!

I have always been intrigued with the story-within-a-story concept. I pulled it off with Uncharted: Story for a Shipwright, and even Spilled Coffee has that feel, and both those novels are written in first person as a thirty-something man. Don't ask me why, I just like that POV. At any rate, I've had some qualms about putting Girl Running out there. Yes, it does push some societal boundaries—the teacher-student relationship scenario, but that's really not what the story is about. It's not the theme, anyway. It's about stepping up and following through and finding our own way when no one else is willing to "step up" in our behalf.

So, Girl Running now has a new format—a story within a story—and a new name. The Step-Up Man. Here is what you'll read on the back cover:

In the wake of a student suicide, twelfth-grade English teacher James Grayson is second-guessing his “don't bring work home” policy, while his reluctance to commit to his girlfriend—to marry and have children—has his personal life hanging in the balance. He can't even commit to finishing one of his own novels.

When sullen and withdrawn student Layla hands in a compelling assignment that is actually part of a larger body of work, James becomes obsessed, not only with convincing her to let him read it, but with the notion of stepping up to do the right thing by his girl-friend, his students and his writing, and how they are all intertwined.

Layla acquiesces. James has no idea what he’s in for as she weaves a tale about 17-year-old orphaned "Leila" who needs to live inconspicuously until she graduates. Three teachers make that impossible—the handsome track coach, her math teacher from hell, and a jealous gym instructor. Compromising situations, accusations of misconduct, and judicial hearings put her autonomy and even her dignity at risk unless she learns to trust an unlikely ally.

James guesses at which parts of Layla's novel are true and what is wishful thinking. If the "step-up man" in Layla's story turns out to be fictitious, can a cast of characters still change the way James views his own life?

Yes, it's a little long, but then, so is the story. Yeah, it's going to be a thick one. Now I need to finish editing and decide if I'm going with a smaller font (10 pt) and thus smaller page count, or make it a whopping 400+ pages. I'm also toying with the idea of two different fonts—Times New Roman for James Grayson's narration and then switching to Courier (or another typewriter font) for Layla's manuscript. What will my readers tolerate when it comes to that sort of formatting creativity?

Anyway, I hope to get these polished and published sometime this autumn, or perhaps even sooner.
Posted by J.B. Chicoine at 10:06 AM 16 comments: