A Boatload of Inspiration!

A number of years ago, I was the recipient of a wooden model boat, handcrafted to scale. My father built it when he was a kid, using plans he found in an old Rudder or Yachting magazine from the late ’40s—the Pavana, designed by naval architect, Philip Rhodes. It has always held my fascination and when I set out to write Uncharted: Story for a Shipwright, I incorporated the refitting of a boat from that era with the Pavana in mind. I gave her a new history and renamed her Mary-Leigh, built by Buck, the old-timer shipwright of Uncharted.

In my research, I found that the Pavana still exists and bears the distinction of once belonging to L.Corrin Strong, a U.S. Ambassador to Norway. She has sailed between Port Moresby, Papua New Guinea and Australia, was dry-docked in Maryland USA, and is currently undergoing refitting by a shipwright in British Columbia’s Gulf Islands, where she continues to pique the imagination.

One piece of research that continues to fascinates me is the Pavana’s log*. It captures the tail end of the pre-fiberglass, wooden boatbuilding era, with all its romance.  One of my favorite images from the log is a photograph from May 29, 1949, with the caption, ‘We serve cocktails onboard’, accompanied by a charming description of one of Pavana’s first excursions. I love the description of how ‘four youngsters of assorted ages…swarmed all over the boat but did no damage and got into no trouble’.
And this one—final inspections just before she launches: 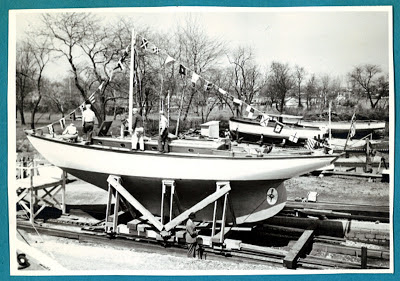 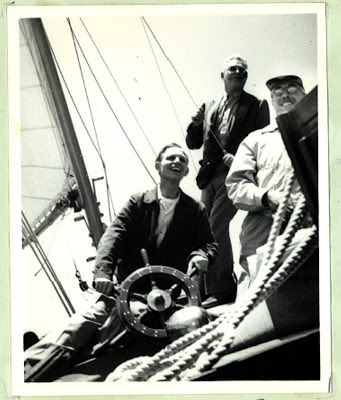 Another is of the owner and friends, sailing at a good heel with the mizzen mast in the background.

But my most favorite photos are from an old magazine, The Chesapeake Skipper, (June 1948). They are of the Pavana (previously named Mansurah and changed before launching) under construction. Although Pavana’s builder, H. K. Lagare of the Balco Yacht Co. is pictured, I envision old Buck posing for the photograph, beaming with pride and imagining voyages and adventure.

In Uncharted, Buck’s grandson, Samuel, stuck in a rhythm of mediocrity, is restless for that adventure. Buck insists, “The sea is in your blood, surging with all its turbulence and as subject to longing and discontentment as the sea is to the tide.” Sam used to laugh it off as the romantic notions of an old man. He assumed that over the generations his seafaring blood had thinned, had been adulterated by the contented sort who stuck around. That he, a shipwright himself, would be one of the guys who married some local girl and carried on the family business, placating himself with the occasional weekend sail. As the story unfolds, he isn’t so sure. What Samuel Wesley does know is that there’s a romance to living on the water and being skilled in a trade that, for centuries, has been the backbone of the maritime industry, and the Pavana captures that romance.