After looking at this header on my blog for well over a year (has it been that long?), I've decided that it's pretty much the most boring header I have ever seen. At the time I designed it, I suppose I thought it looked classic—sort of simple and understated, (like me). Now it just looks uninteresting and stupid. I don't think I like the title either. The J.B.Chicoine seems okay to me (even though probably none of you know how it's pronounced*), but I don't know about the rest of it...
So, anyway, I've decided to employ my artistic powers and design a new, bookish header, and I'm doing it over at my Unsupervised & at Large art blog...

*Currently, we pronounce it She-kwan'—with more of a silent 'n' at the end. Kinda French sounding, which is what it is. But when we used to pronounce it She' kwin... It's a long story...
Posted by J.B. Chicoine at 7:21 PM 19 comments:

Okay, this isn't just laziness—it's a matter of grammar that I can't seem to get a solid answer on. When referring to a style of music—blues to be specific—or is that Blues (could be jazz for that matter), is the 'B' capitalized, as in a proper noun?
As in:
"She would have paid more attention to the music, but blues always seemed somewhere in the background, such a familiar part of the noise in her head, that she paid it no mind."

Or is it a matter of whether it's preceded by a definite article? 'the Blues' or simply, blues in general?

Any grammar / blues aficionado out there?
Posted by J.B. Chicoine at 7:27 PM 6 comments:

Back to Where I Started?

Well, I’ve been busy putting together something for Notes From Underground, way ahead of time, which is a little unlike me. Actually, I’m not certain that it’s like or unlike me, seeing as I’ve never had to work under a writing deadline. I suppose that if I had to come up with something from scratch, it might feel entirely different. 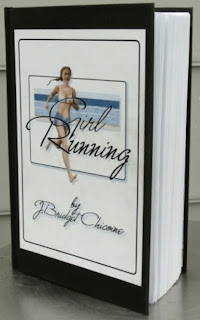 At any rate, I’ve written a short story based upon a scene from an earlier unpublished novel of mine—that is, from a sequel to my second novel.* When I wrote Girl Running, and then, Portrait of a Protégé, I had absolutely no idea about writing rules and publishing. I only had a high school-level grasp of English—and the benefit of parents who had a fair handle on English grammar. That’s it. I couldn’t even claim to be an avid reader** Oh, and I had a huge imagination!
After several years of mulling over a particular scenario, and coming up with character backstory, I decided to wing it and simply get the story out of my head and into MS Word. I wrote it for my husband and I had a blast doing it! Impressing Todd was my only desire. I even printed and bound it for him—all 150,703 words!*** He’s the one who planted the idea of publishing, so I will blame all my angst, henceforth, on him.
It wasn’t until I began writing Story for a Shipwright that I investigated what the industry considers ‘good writing.’ I jumped through all the hoops. I read the agents' blogs, got beta readers and revised and revised and revised. I like the story—no, I love the story—I think it is sound and I will publish one way or the other. But I wonder if, in all the advice and critiques and revisions, I have somehow homogenized it...like chrome polished down to pot-metal.
So, here I am, between stories, and it’s my first love that still nags me. Rewriting just one scene, utilizing what I've learned, and then writing it with the liberty of doing it how I want has made me seriously reconsider Leila, a girl raised by a couple of mixed up guys—one black, one white—who just wanted to be Blues musicians and had no business raising a child on the road. I think her story as an adolescent on her own, breaking into womanhood, may be worth a complete rewrite—at least it’s a notion I’m toying with…
* I hesitate to claim my very first completed novel of 23 years ago—Relative Survival—but it qualifies in length.
** Yes, I know that’s blasphemy, but if I started reading anything, I did not have the self-discipline to put it down until it was done, and that can really mess up one's life--especially when one has a family. Borderline OCD?
*** the sequel came in at only 123,753 words
Posted by J.B. Chicoine at 8:12 PM 12 comments: